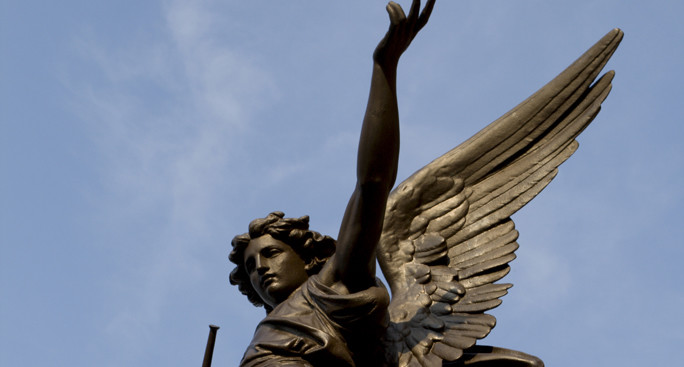 The title of this sixth-season-opening concert—Make a Joyful Noise—comes from the opening line of Psalm 100.  (The word “noise” in the familiar King James translation is not the only possible rendering of the original Hebrew verb, which may be the more literal “Raise a shout of triumph.”  The full psalm can be found in the Mendelssohn translation below.)

The “joyful noise” tonight encompasses a wide variety of musical traditions and styles—ranging back nearly four centuries into the German Baroque and as far forward as today’s popular Christian “praise music”—showing that skilled composers can draw the best of “joyful noise” from any trained and enthusiastic choral singers, helping them (in Director Stephen Mulder’s words) “to perform in any style with authenticity and with technical and artistic integrity”—and indeed even multiplying their joy in meeting  these high standards of performance.

This power of music to cut across boundaries of history and style to unite those whom it inspires is further represented tonight by the joining of forces between Griffin Choral Arts and the young singers of the Griffin High School Advanced Chorus, directed by Mr. James Lindsey.  We are all grateful for their presence and for their contributions to tonight’s concert.  In the spirit of Psalm 100 we can all be moved by this musical joy throughout this evening, throughout our lives, and perhaps even beyond:  in the words of tonight’s Kirby Shaw spiritual, “What a joyful noise, . . . next stop will be paradise!”

This sixth season-opener is a rousing introduction to the concert theme–Make a Joyful Noise–made infectious by the frequent changes in meter that make an urge to dance almost irresistible.

Well-known choral composer René Clausen has served as choral director at Concordia College, Moorhead, Minnesota, since 1986.  The Concordia Choir under his direction was earned international acclaim through its televised appearances on the Concordia Christmas Concerts featured on PBS stations nationwide.  Another of his most familiar anthems, “Set a Seal Upon My Heart,” was featured in a GCA concert in May 2010.

This is a German-language setting of Psalm 100 (also known by the Latin phrase Jubilate Deo):

Er hat uns gemacht, und nicht wir selbst,  /  He has made us, and not we ourselves,

Zu seinem Volk und zu Schafen seiner Weide.  /  To be his people and the sheep of his pasture.

Go in through his gates with thanks and [into] his courts with praise:

For the Lord is friendly, and his favor is eternal and his truth forever and ever.

Speaking of the place of this work in Mendelssohn’s music overall, editor James Jordan notes in the preface to the choral octavo, “It may come as some surprise to many that over one quarter of Felix Mendelssohn’s output was in the genre of choral music, a large portion of which is unaccompanied motets [like tonight’s, for double choir].  Mendelssohn viewed himself as a continuation of the German motet lineage, begun by Schütz and carried through to Bach. . . .  Within all of the Mendelssohn motets one can see the text setting and polychoral influence of Schütz and the contrapuntal influence of Bach.  Mendelssohn’s desire to make strict adherence to the textual articulation the basis for all musical decisions is clear in all of his choral music. . . .  It is helpful to think of this as a quasi-polychoral piece because of its rapid and surprising changes of texture.  The ideal sound for this piece vacillates between a Baroque quality of sound in the tutti section and a more transparent sound in the contrapuntal sections.  It is this contrast that brings the piece to life.”

Although born into a prominent Jewish lineage (most notably including his grandfather, the well-known philosopher Moses Mendelssohn) Felix Mendelssohn eventually converted to Lutheran Christianity, adding the surname Bartholdy.  Coincidentally, this setting of Psalm 100 may have been composed originally for a synagogue dedication in Hamburg in 1843, although more likely when it was published in 1855 it had been written for the choir of the Berlin Cathedral.  His Jewish musical heritage may also explain Mendelssohn’s insight into the musical power of Psalm 100, the psalm being part of the Jewish daily prayer service, particularly for its purpose as the thanksgiving offering.  This seems significant in light of further comments by editor James Jordan about the connections between Mendelssohn’s life and his art, and perhaps in particular connection with this setting of this exuberant psalm:  “Finally, it is important to know Mendelssohn the person when performing his music.  Mendelssohn always viewed the world as brilliant and joyful.  Pessimism, self-doubt, and the questioning of religious beliefs were not a part of his musical perspective.  At all times his music is joyful and uplifting, speaking directly to the most positive part of the human experience.”

This is a setting (sung in Latin) of Psalm 117, the shortest of the Psalms (as well as the middle chapter in the King James translation of the Bible):

Laudibus efferte, omnes populi!  /   Let praise be brought forth, all [you] people!

Quia valida facta est super nos misericordia ejus,  /  Whose mercy is made great over us,

Et verita Domini in aeternum, Alleluia!  /  and the truth of the Lord is eternal, Alleluia!

A contemporary of Handel, Bach, and Vivaldi, Telemann was a largely self-taught composer who became the most popular composer in Germany after Handel’s move to England.  Bach’s and Telemann’s lives connected in many ways, perhaps most interestingly in their Lutheran heritage, their astoundingly productive careers, and even in Telemann’s becoming godfather of Bach’s son Carl Philipp Emanuel.  Indeed, had it not been for Telemann, perhaps Bach’s most productive period—his work as Kantor at the Thomaskirche in Leipzig [also Mendelssohn’s home city for much of his life]—might never have been, or might have taken a far different turn.  Telemann had been the first choice for that position but could not take it because his employers in the city of Hamburg would not release him.  Bach (the third choice among the applicants) eventually was given the post.

Though by a contemporary Caucasian-American composer, this piece is clearly in the tradition of the African-American spiritual, and represents the aspect of that tradition that fairly bursts with joyful energy.  (There exist at least two other spirituals with the words “Plenty Good Room” in their titles, each based on a different melody and full text.)

Kirby Shaw earned degrees in music education and choral composition at San Jose State University and a DMA in Choral Conducting from the University of Washington.  A composer and arranger with nearly 3,000 music publications, he has won numerous ASCAP awards as well as commissions, including from the Mormon Tabernacle Choir.  He taught in the Mt. Shasta public schools before joining the faculty at the College of the Siskiyous  in California, where he founded an innovative vocal jazz ensemble, later founding similar groups at the University of Washington, Colorado State University, and the University of Missouri—Kansas City.  He currently directs the Jefferson State Choral Coalition at Southern Oregon University.

Valuable insights into the origin of this piece and into the life of its composer are provided by Paul Ingraham, program annotator for Summit Chorale, chorus in residence at Drew University in Madison NJ:  “Composer, conductor and pianist Robert Ray, born in St. Louis, Missouri, did not come from a musical family.  Nonetheless, his parents, a factory worker turned custodian and a nurse, instilled an early appreciation of music in their son.  Dr. Ray recalls: ‘We listened to a lot of different music. The record player worked overtime.  We also went to the symphony a lot.’  He began piano lessons at age 10 and, after studying diligently for seven years, earned a scholarship to Northwestern (now Truman State) University, from which he graduated with a bachelor’s degree in piano performance and pursued graduate study.  He has appeared as soloist with orchestras in the United States and Korea and as an accompanist to Bobby McFerrin and the late William Warfield.  In 1963 he joined the faculty at the University of Illinois-Urbana as an accompanist and coach with the string department.  He subsequently founded the Black Voices of Inspiration at Purdue University and the Robert Ray Singers. . . . In 1993 Dr. Ray joined the faculty at the University of Missouri-St. Louis. .  and was given an honorary Doctorate of Music by Vincennes University.”

“It was during his tenure at the University of Illinois that Ray founded the Black Student Chorus for performances with artists such as James Cleveland, Ossie Davis, Edwin Hawkins and Max Roach.  It was this chorus that gave the premiere of the Gospel Mass with the composer as tenor soloist.  Notably, in that chorus for that first performance were future choral directors Anton Armstrong (St. Olaf College) and André Thomas (Florida State University).  In the late 1970s, Dr. Ray met Father Clarence Rivers, who convened a number of workshops on liturgy planning with the objective of integrating elements of Afro-American worship into the Catholic liturgy.  Dr. Ray joined the liturgy team of the National Office of Black Catholics.  The Gospel Mass, written in 1978, was created in response to these workshops.”

“The Gospel Mass sets the five movements of the Ordinary of the Mass—those parts of the Mass which remain fixed throughout the liturgical year—plus added an Acclamation, in gospel style, scored originally for tenor and soprano soloists, chorus and jazz combo.  The composer states: ‘It is my desire to combine centuries of old traditions of Mass settings with sounds of the contemporary Black Church.  The move from Latin to English (mandated by Vatican II) created new opportunities for composers to express their feelings about the texts of the Ordinary of the Mass.  I wanted everyone to experience the sense of joy and celebration that is generally felt in true African-American worship.’”

While labels can be dangerous, if we understand their context we can find those labels helpful.  This piece would most often be described as “gospel music” and “praise music”–even though, of course, all Christian music of any period is Gospel-based and much of it is praise-giving in text or style or both, as evidenced by all the other music on tonight’s program.  Still, however, “Worthy To Be Praised” especially epitomizes  “Gospel” and “Contemporary Praise” styles of church music.

Program notes and translations by Bill Pasch, with thanks to Steve Mulder and to Paul Ingraham’s notes on Robert Ray’s

All works on tonight’s program are performed under ASCAP license, except as otherwise noted.