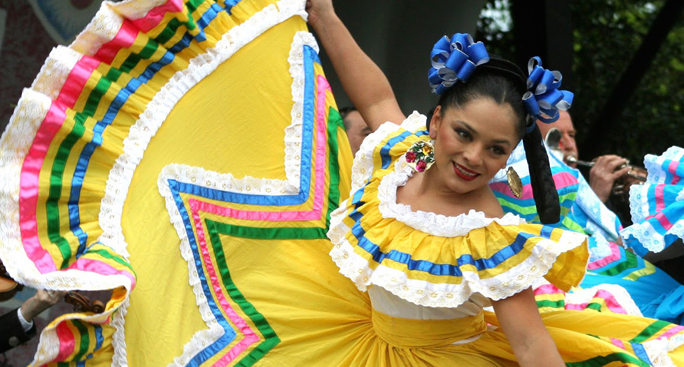 The season concludes on Cinco de Mayo with choral music from around the world composed for celebrations.

With pleasure Griffin Choral Arts welcomes you to A Choral Fiesta—with emphasis on “pleasure.” Fiesta is the Spanish word for “festival,” a celebration offering the “pleasures” either of the flesh or of the spirit, or of both. Fiesta brings immediately to mind–and to the senses—the various colors, sounds, tastes and aromas of eating, drinking, dancing, singing, companionship, and social bonding we can so readily associate with festive celebrations. Fiestas also often commemorate important historical or cultural events–hence the use of the word “festival” by liturgical Christians to mean the important “feast days” of the Church such as Easter and Christmas.

While today’s date marks the important Mexican holiday of Cinco de Mayo commemorating the victory of the Mexican militia over the French army at the Battle of Puebla in 1862, tonight’s music ranges over many cultures and holidays, but all in the over-arching spirit of fiesta.

Well-known contemporary British composer John Rutter gets the party off to a rollicking start with his rhythmic 1975 setting of an anonymous 15th-century tavern song. The lyrics are charming in their earthiness. Also interesting in their own right are Rutter’s editings of the traditional wording. Perhaps for brevity Rutter omits the most humorous of the traditional stanzas: “Bring us in no butter, for there are many hairs; / Nor bring us in no pig’s flesh, for that will make us bears”; then in a later stanza describing the pudding Rutter substitutes the phrase “goat’s blood” for “God’s blood” (no doubt for modern religious sensitivities).

The word “madrigal” comes from the Italian matricale, which literally means “of the womb” but more figuratively meant a pastoral song in the “mother” tongue (not Latin but the vernacular). Madrigals arose near 1300 in the time of Dante’s championing both of the Italian language and of lyric poetry that elevated human love to near-divine status. The best-known examples of madrigal form, however, date from the early 1500’s through the early 1600’s, spreading from Italy throughout Western Europe and Britain.

Thomas Morley, a student of William Byrd, was a musician in the Church of England, but his chief renown came as the leading English composer of the sunnier style of madrigal, of which tonight’s selection is one of the best known. Even with his Church music connections Morley’s lyrics celebrated the many pleasures of the flesh (including the “Barley Break” game mentioned in the final stanza).

May Day (May 1) has for centuries and throughout many cultures been an important holiday celebrating the end of winter, and in both religious and secular contexts.

German composer Hans Leo Hassler, like his English counterpart Thomas Morley, is an especially good example of the “international” confluence of styles and of the Late-Renaissance/Early-Baroque bridging of the worlds of the “sacred” and the “secular,” not only in the madrigal but in other musical forms. Though of Protestant background, Hassler was successful in composing music for both Protestant and Roman Catholic use. Also like his English counterpart Morley, Hassler’s madrigals celebrate earthly pleasures, in this case of “dancing and leaping”—and other related diversions.

This new work was commissioned by the San Francisco Symphony for a 2013 concert celebrating the Mexican national holiday of the Dia de los Muertos (Day of the Dead) to be given on the concluding day of the holiday itself, November 2.

Perhaps the simplest way to understand the festival of Dia de los Muertos is as the Mexican equivalent of Halloween, in its original nature as All Hallows’ Evening, the night before All Saints’ (or All Souls’) Day, when the spirits of the departed are believed to return in semi-visibility to their living loved ones. Dia de los Muertos is actually a three-day fiesta, encompassing the arrival of the visiting spirits of the departed on October 31 and their departure on November 2. Celebrations of Dia de los Muertos include feasting and merrymaking, including the prominent displays of artistic effigies, especially of skull faces. Unfamiliar observers may think the celebration of death to be morbid, but the holiday is more complex, seeing death not only as a part of life but as an often humorous one at that.

Although an “Anglo,” composer David Conte unpretentiously and effectively interweaves traditional Mexican folk lyrics with indigenous melodies and musical sounds and styles, including the traditional-instrument accompaniments of guitars and violins. Such world-music eclecticism occasionally appears in echoes in the work of other “Anglo” composers of similar styles (Nino Rota in the first movement and—as veteran GCA concertgoers may recognize—Karl Jenkins in the second and third movements).

Ohio-born David Conte earned his bachelor’s degree from Bowling Green State University and his master’s and doctoral degrees from Cornell University. He is Professor of Composition and Chair of the Composition Department at the San Francisco Conservatory of Music (where he was a colleague of the late Conrad Susa, composer of Carols and Lullabies: Christmas in the Southwest, sung by GCA in December 2009). He has also taught at Cornell University, Keuka College, Colgate University and Interlochen. In 2014 he was named Composer in Residence with Cappella SF, a professional chorus in San Francisco.

I. La Martiniana
Hispanic lyrics are rich in “Quando yo muero” lyrics, featuring a speaker’s instructing a loved one (or ones) that “when I die” the spoken-to loved one should remember the deceased with a desired set of actions or memories. (A Morten Lauridsen example of such a lyric was featured in concert this past summer by the GCA Chamber Chorus.) Conte’s speaker pleads, “Little girl, when I die, don’t cry over my grave. Sing me a beautiful song [this Martiniana] that can break hearts but also keep my memory alive.”

The characteristic “Latin” sound of the music owes to the tonality centered in A minor, with its guitar-friendly chord progressions to D minor- and E major-related fingerings.

II. La Bruja (The Witch)
Nowhere is the phantasmagorical sense of humor of the Day of the Dead found more vividly expressed than in this set of lyrics about a speaker’s imaginings of being kidnapped by a comically grotesque witch. This second movement was arranged by the composer for the Central High School-West’s Men’s Choir (of Doylestown PA) to be accompanied by guitar.

This is a lament in which the speaker, suffering from unspecific grieving and emptiness, appeals to the mysterious figure of the Weeping Woman (the Llorona sung to in the lyrics) for sympathy, almost as if she were the Virgin Mary, an object of adoration. The translation in the score adds about this female figure, “She is often pictured in song as weeping for her dead husband or children, [but] in this love song version, Llorona is used as a simple refrain.”

This piece—whose Spanish title means both “dance” and “dancing”–is a fiesta unto itself, in terms of its far-reaching inspiration and eclectism. Composed by a contemporary American born in Nebraska and of Slavic ancestry, the piece sets a mystic Asian-Indian poem to a musical style that—with the possible exception of David Conte’s Three Mexican Folk Songs—is the most “fiesta”-sounding choral piece on the program, even ranging trans-Atlantic to the flamenco style from Eastern-European-Romany (“Gypsy”)-influenced Spain.

The poem inspiring Danza! was written by fifteenth-century Indian poet Kabir (Arabic: “Great”), something of a poet-saint revered by Hindus, Muslims, and Sikhs. The English translation was then by Rabindranath Tagore, the first non-European winner of the Nobel Prize in Literature, in 1913:

Dance, my heart! dance today with joy.
The strains of love fill the days and the nights with music, and
the world is listening to its melodies:
Mad with joy, life and death dance to the rhythm of this music.
The hills and the sea and the earth dance. The world of man
dances in laughter and tears.
Why put on the robe of the monk, and live aloof from the world in
lonely pride?
Behold! my heart dances in the delight of a hundred arts; and
the Creator is well pleased.

Although not using all of these lines, the choral lyrics and musical setting unmistakably convey the crescendo of passion expressed by the text.

Spevacek’s works have been performed on the MENC’s Largest Concert (sponsored by the Music Educators National Conference), nationally televised on PBS, and premiered at conventions of the American Choral Directors Association and on The Hour of Power at the Crystal Cathedral. In 1999, she was a featured conductor at Carnegie Hall.
Tambur J. Paix’s Organ Book (1583); arr. Lajos Bárdos (1899-1986)
The fun (both in the hearing and in the singing) of this musical depiction of an old Hungarian dancing tune arises from the use of both musical sound and the written word to imitate the instruments being played: pipes (flutes), the tambur (a long-necked lute from Asia and Asia Minor, also referred to as the pandur or the tamburitza), the string bass, and the cimbalom (a hammered dulcimer, whose pronunciation—“tzimbalom”—is itself onomatopoetic). These are mainly stringed instruments, not only common to folk bands but of special interest to the singer in this song, who hopes to pluck the heartstrings of his fair young maiden to join him in the dance.
The work is authentically Hungarian, both in its original text (by Karoly Vargha) and in its musical setting. Indigenous Hungarian instruments are named in the text and even imitated vocally. (Those familiar with the suite from Zoltan Kodaly’s opera Háry János, for example, may “hear” the echoes of the cimbalom, the Hungarian hammered dulcimer, in this choral setting.)

From the website of the Skirball Center for the Performing Arts of New York University comes this witty plot summary of the twelfth of the fourteen comic operas composed over the period 1876-1896 by the British team of W. S. Gilbert and Arthur Sullivan:

Are you seeing double? You will during The Gondoliers, as two different groups with two different storylines collide in one boisterous and joyous show. Spanning both stories is the marvelously menacing Grand Inquisitor, Don Alhambra del Bolero, who stole the infant son of the King of Barataria and cast him off to Venice, but only after the young future monarch was secretly wed to a nobleman’s daughter. Now, the unwitting heir to the throne and his “brother” are gondoliers seeking mates when the impoverished nobleman brings his daughter to Venice in search of her infant groom. Since nobody can tell which gondolier is the true heir to the throne, Don Alhambra arranges for them to leave their newlywed brides and reign jointly until the proper monarch can be identified. After much confusion, lots of exuberant dancing, and jolly Italianate musical ensembles, the stage is set for leaving all concerned, including the audience, with feelings of pleasure!

A longtime fan of Gilbert and Sullivan, GCA Director Steve Mulder has both conducted and sung starring roles in numerous G&S productions over his career.

With great poetic appropriateness, both the above review and tonight’s concert end on the word “pleasure.” So infectiously cheerful, even giddy, is this musical finale that you may find it difficult not to dance your own cachuca, fandango, or bolero on your way home tonight.

Program notes and German translation by Bill Pasch (except as otherwise attributed), with thanks to Steve Mulder.