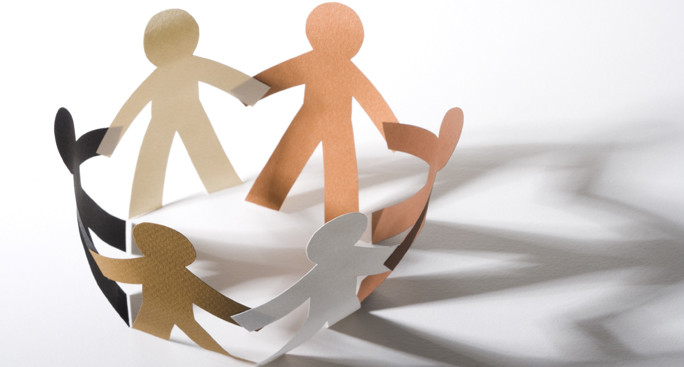 The songs presented in this year’s “Masterworks” concert vary widely in terms of their places of origin, original intention or use, and musical style or sound. Still, they all carry with them the idea of tradition. Many of the pieces are known as “traditional folk songs,” and are presented in choral arrangements that do not seek to alter their original state to any great extent. Other selections are the result of a combination of two or more artistic or religious traditions, and still others specifically address the conflict between unfamiliar cultures. The “traditional” or “folk” songs tend to deal with things that are native to the area that one refers to as home: songs written in memory or praise of a particular children’s game, flower, insect, geographical feature, or animal peculiar to one’s native region. Such references are also abundant in North American folk tradition. Many pieces also are songs of religious faith, making it easy to envision the international community of believers.

African Processional
We open our program this evening with a processional song of African origin that bids “welcome!” in Swahili to all who are present. It opens with a chant-like section reminiscent of many African musical traditions, then proceeds with emphasis on repetition and interesting rhythmic patterns. The percussion ensemble that will figure prominently into many of the evening’s selections first accompanies the choir on this piece.

Jambo rafiki yangu Welcome, my friend!
Kawaida ume fahamu, Always understand me
ni se fahamu. And I will understand you.
Wewe ni mwema. You are so wonderful.

Uyai Mose
“Uyai Mose,” meaning “Come, all you people,” is a folksong from Zimbabwe. It opens with a rhythmically free statement of the main theme; then the text alternates between Shona and English. At several points, smaller groups of singers emerge from the overall choral texture and sing contrasting material to provide interest. The music itself is an example of a tradition born out of Africa, but many religious believers around the world will recognize and respond to a call to worship. Any of those who know their God as Yahweh may readily respond as David did: “I was glad when they said unto me, ‘Let us go into the house of the Lord.’”

Horizons
“Horizons” did not originate from South Africa, but was written about its history. It was commissioned in 1995 by the King’s Singers as they embarked on a tour of South Africa and wished to honor its indigenous peoples by telling the story of the Europeans’ arrival. The text describes the experience of the bush tribe who lived at the Cape of Good Hope from the time that they saw the English and Dutch ships arriving on their shores until the time that their people had been nearly wiped off the face of the earth. Several animals are mentioned in this song: the springbok and eland are both species of antelope native to southern Africa. This song uses a great deal of vocal percussion in addition to clapping and snapping to replicate the instruments used both by the tribe and the armies arriving with bugles and snare drums. The unfamiliar syllables are also reminiscent of the tonal languages widely used in Africa. Here, unlike in the “Misa Criolla,” the two traditions in question are not combined into a new form of expression, but rather are used to demonstrate the conflict that was so prevalent between European colonizers and African natives during the 1700s.

Sleep, my springbok baby,
Sleep for me, my springbok child,
When morning comes, they’ll come a-hunting,
for they are hungry and thirsty.
They will come across the waters:
Mighty saviours in their sailing ships,
And they will show us new and far horizons.
And they came, came across the waters:
Gods in galleons, bearing bows of steel,
Then they killed us on the far horizon.

Misa Criolla
The Misa Criolla, or “Creole Mass,” is representative of a very particular intersection between a place, Argentina, and a time, the years immediately following The Second Vatican Council. Held in 1962, Vatican II relaxed some requirements on aesthetic elements of worship that had been in place for hundreds of years. The main difference was the language that could be used for settings of the Mass. Until this point, the Mass was sung exclusively in Latin, with the notable exception of the “Kyrie,” which is Greek. Vatican II thus also recognized that vernacular translations of the text and local flavors of musical styles would be appropriate. Composers all over the world took advantage of the new guidelines to produce settings of the Mass Ordinary that incorporated local elements. Ariel Ramirez’ setting is an excellent marriage between the Spanish translation of the ancient text and several traditional music forms of his homeland. The outer two sections, “Kyrie” and “Agnus Dei,” which are both penitent prayers for mercy and peace, are set in the style of recognizable folk songs. Two of the inner movements—the “Credo,” a statement of basic Christian beliefs, and the “Sanctus,” a celebration of God’s holiness—utilize rhythms and patterns taken from dances. The second movement, “Gloria,” begins and ends with a song, and contains a slower dance-based portion in the middle. Appropriately, dance forms are used to highlight the more joyful and confident texts. During many of the song-based portions, the choir acts as an instrument to accompany the soloist. At several points, the texture strongly mimics the sound of Gregorian chant—an acknowledgement of the older style in the midst of a ground-breaking work. This work beautifully marries the age-old tradition of the Catholic Mass with the equally perseverant traditions of song and dance from rural Argentina.

Arirang
“Arirang” is Korea’s most beloved and familiar folk song. Its lyrical, longing melody takes precedence in this simple but poignant a cappella setting. This traditional song immortalizes the Arirang Pass, which refers both to an ideal mountain meeting place for lovers and to at least one actual route through the Korean mountains. In a true case of life imitating art, several mountain passes have now been renamed “Arirang Pass” in order to evoke association with the famous song. This arrangement was prepared for Seoul Olympic Arts Festival, which immediately preceded the 1988 Seoul Olympics.

Hotukaru Koi
This children’s song, translated “Ho, Firefly!” conjures images of fireflies dancing on a summer evening, with children skipping along in intent pursuit. The song begins and ends with a pattern of quarter notes on a single pitch, A, and quarter rests. This motive seems to echo the “blinking” of the firefly’s glow. The SSA setting places the three voice parts in constant imitation, and the interaction between offset patterns provides harmonic interest. This selection will be presented in the original Japanese.

Sakura
“Sakura” is a folk song celebrating the iconic cherry blossom, the national flower of Japan. The haunting melody is centuries old and beloved by the Japanese people, as well as being easily recognized in the West as representative of the beautiful but staid nature of traditional Japanese music.

Domaredansen
Tonight’s international musical tour that began in Africa and spanned South America and Asia now turns to Western Europe with a Swedish folksong. “Domaredansen” is a traditional carol that would have been sung to accompany the “Dance of the Judge,” which is really a game not unlike the one commonly played by American children, “Honey, if you loved me, you’d smile.” The dancers form a ring, and one person is placed in the middle of the circle with a lit candle. It is the goal of the candle-bearer to choose a member of the opposite sex and make him or her laugh. If the candle-bearer is successful, the candle then changes hands and the game continues. In this setting, the song opens in a fun boogie-woogie style introduced in the piano accompaniment. The middle section provides contrast with an a cappella fugal treatment of the phrase “If they dreamed of a lover in the night,” which is followed by a repetition of the opening boogie idea.

I Can Tell the World
Moses Hogan (1957-2003) was a pre-eminent conductor and arranger of African-American spirituals. His setting of the traditional spiritual “I Can Tell the World” is a good representation of his work, using interesting harmonies, distinctive rhythms, and often splitting the choir into seven or eight different voice parts. This song can claim root in several different recognizable traditions. The melody and text are a traditional African-American spiritual, a style that itself originated from an African chanting tradition. Spiritual melodies can be quite repetitive, often employing call-and-response passages, and would have been used alongside another tradition, that of oral history. Repetition is useful for reinforcing memory, and the concept of testifying to God’s intervention in one’s life is also universal. Moses Hogan himself has created an impressive body of work that has become a choral tradition almost unto itself; it is impossible to listen to choral music for any length of time without encountering one of his masterful settings. Therefore, this selection has been refracted through the multiple traditional prisms of Africa, America, Christianity, and Moses Hogan in being refined into the form that it takes this evening.

Our wish is that while you are exposed to various traditions far removed from your own background, you will recognize the numerous aspects of this music that are, in fact, quite familiar. We also hope that you will make your Griffin Choral Arts experience “a repeated action”: that is, a tradition of your own. Thanks for coming, and we’ll see you in May!
–Program notes by Theresa Chafin