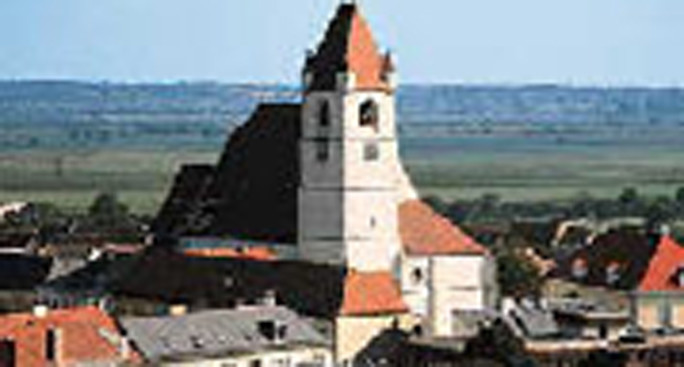 “Dona nobis pacem” (“Give us peace”) is a major theme of tonight’s Masterworks concert. Griffin Choral Arts adds its voice to the “Song of Peace” Project: an international effort to inspire choruses around the world to sing versions of the plea “dona nobis pacem.” Despite its choice of the month of March 2008 as the fifth anniversary of the war in Iraq, “Song of Peace” is not an anti-war effort focused exclusively on that war; rather, the project “seeks simply to redirect public attention from the concept of war to the concept of peace,” using the medium of music. (More about “Song of Peace” may be found at http://www.songofpeace.org.)

Although the selections on tonight’s program exhibit surprising variety of style and mood (sometimes even genial humor), collectively they seem to conclude that if hope can come from the plea “dona nobis pacem” one powerful source of that hope is the music itself—or, as put by contemporary hymn lyricist Richard Leach, “When our song says peace and the world says war, we will sing despite the world.”

Ralph Manuel’s moving “Alleluia” (1987) is not the exuberant “God be praised” of religious exultation. Rather, its generally quiet meditation upon the single word “Alleluia” recalls the Old Testament Psalms of lamentation and the Book of Job. So heartfelt is this “Alleluia” that it has often been included in concerts commemorating the victims of the Oklahoma City bombing in 1995.

Born in Oklahoma City, Ralph Manuel earned bachelor’s and master’s degrees in music from Oklahoma City University and Southwestern Baptist Theological Seminary. Following twenty-four years as a missionary to Brazil, he has been Minister of Music at Heritage Baptist Church in Annapolis, Maryland, since 2004.

Johann Sebastian Bach’s nearly weekly challenge as Cantor (music director) of St. Thomas Church in Leipzig, Germany, was to compose a cantata (a multiple-movement “choir anthem” with instrumental accompaniment) that would expand upon the Bible readings appointed for the coming Sunday worship service, but not merely duplicate those readings or the pastor’s sermon.

Bach met that challenge for September 10, 1724, in Cantata 78, a masterwork by any measure. But how does this cantata fit a “dona nobis pacem” theme? The answer lies in the Epistle reading appointed for the Fourteenth Sunday after Trinity, for which Bach composed the work. Paul’s letter to the Galatians (5:16-24) addresses the “warfare” between the Flesh and the Spirit. It is this spiritual warfare—in Bach’s eyes, not just the general temptations of the flesh but the more specific tendency toward unbelief and even despair—that pervades Cantata 78 and informs its musical and psychological complexity.

The opening choral movement begins with a downward motion so laborious that its main theme seems capable of moving only in half-steps. The bass singers eventually pick up the pattern (known as a passacaglia) begun by the lower instruments of the orchestra. Above the basses, the tenors and altos sing variations on the chromatic theme, usually in counter-motion to each other, these “inner voices” seeming to vacillate in their human frailty. All the while, above the turbulence of the three lower voices, the sopranos sing the melody line of the familiar Lutheran (Evangelisch) hymn: “Jesu, der du meine Seele.”

Bach, the master of musical counterpoint, uses all the tools at his disposal to make his listeners hear—and even feel and see—the “warfare” between the fragility of human belief and the stability of faith expressed in the overarching hymn tune. We realize that we are the “my” of the cantata’s opening words: “Jesus, you . . . through your bitter death have mightily ripped my soul out from the devil’s dark pit.”

Although the second movement, the soprano-alto duet “Wir eilen mit schwachen,” is one of sprightliest pieces in all of music, it is still part of the overall context representing gratitude for the salvation that comes only at the cost of Christ’s sacrifice in rescuing humanity from the death of sin. The remaining middle sections of the cantata may be said to engage in a kind of “battle” between light and dark moods, often setting the singers in opposition to the orchestral instruments, in imitation of the spiritual battle Bach sees as the focus of the Galatians text. The reassuring final chorale ends on a major-key chord, Bach’s typical statement of his firm faith in the believer’s victory in Christ over the spiritual death of unbelief and despair.

Currently Director of Music Ministry at The Cathedral of the Rockies (United Methodist Church), in Boise, Idaho, Dr. Paul Aitken holds music degrees from the University of Western Ontario, Southern Illinois University at Carbondale, and the University of Oklahoma. “In Flanders Fields” (composed in 1998) was the first winner of the Raymond W. Brock Student Composition Competition sponsored by the American Choral Directors Association.

The text of this piece is the famous short poem by John McRae, who scribbled the lines during a brief respite from the exhaustion of his work as a military surgeon in France in World War I. The resulting poem (discarded by McRae but retrieved by a fellow officer and published in London in 1915) juxtaposes the horrors of war with the serenity of the poppy fields McCrae noticed around him.

Further insight into both the poem and the musical setting comes from composer Paul Aitken:

The decision to use McCrae’s poetry comes directly out of my Canadian ancestry. I was born in a Canadian town not 40 minutes away from Guelph, Ontario: John McCrae’s hometown.

The whole composition began with the tenor ostinato. I then added a bass and baritone line to complement the tenors, with the hope that the imagery of the wind blowing through the poppies would come to the fore. The soprano and alto lines are the actual voices of the victims of war, the spiritual essence of those who gave their lives in that first Great War. I recall thinking deeply about how I wanted to set the text — especially when it came to the phrase “We are the Dead.” I wanted to ensure that the message remained positive and hopeful rather than dark and overly dramatic.

The specific impetus for the composition of the Mass in Time of War was the commission by Haydn’s patron—Prince Nicholas II of the Esterhazy family—to compose music to celebrate the name day of his wife, Princess Josepha Maria. The War Mass, generally acknowledged as the inaugural work in a series of six yearly masses honoring the Princess, was probably first performed in the Piaristenkirche in Vienna on St. Stephen’s Day (December 26), 1796.

Whereas we have to probe the depths of Bach’s Cantata 78 to discover the ways in which the work reflects a “war and peace” theme, Haydn’s Mass in Time of War makes the theme abundantly clear even in its title. The work is also known in German as the Paukenmesse, or “Kettledrum Mass” (smaller kettledrums having originally been carried into battle to embolden the troops) for the strategic uses of the timpani in sections of the mass to represent the ominous threats of approaching armies—in this particular case, Napoleon’s forces then advancing toward Vienna. The opening of Haydn’s mass also seems predictable as a meditation upon war (as well as traditionally worshipful), in its slow, somber, minor key cries of “Kyrie eleison” (“Lord, have mercy”).

Yet when in only the eleventh measure of the piece the slow Kyrie turns abruptly to the cheerful allegro C major soprano solo—almost shockingly while continuing to sing the penitential Kyrie!—critics may wonder whether Haydn is too eager to put fear of war behind him and adopt instead a “don’t worry: be happy” superficiality. Our knowledge of Haydn’s religious faith, however, argues against such oversimplification of the relationships between musical style and verbal content in Haydn’s choral music, and especially in this mass.

Tonight’s “Song of Peace” theme raises an especially interesting question of Haydn’s musical attitude toward his subject matter. The final “Agnus Dei” section begins in expectedly slow, minor key reflection (including the famous possible rumblings of war in the kettledrums). Yet, again, surprisingly soon, the entrance of the “dona nobis pacem” is bright and lively. Brief turns into the minor key occur, but the overall mood is exuberant. Some listeners hear Haydn assertively demanding peace in the many repetitions of the “dona nobis pacem” phrase. Or the playful energy of the extended “dona nobis” may be taken simply as a thrilling ending. The genial personality of “Papa Haydn” (as his famous younger protégé Mozart called him) may also explain the tone of this surprisingly cheerful musical plea for peace.

Much has been written about Haydn’s use of humor. But why look so genially even upon the subject of war? We may surmise that his strong faith reassures him that even the possibility of his own death at the hands of advancing armies does not threaten his faith in his redemption. Thus, Haydn’s vision of the joy—and joy-bringing—of his art, though different in important ways from Bach’s, is no less complex and profound. History itself bears witness to the victory of Haydn’s music over the wars his mass could not prevent: to Haydn’s funeral in 1809 Napoleon Bonaparte assigned his highest officers as an honor guard.

Michael Horvit is Professor of Composition and Music Theory in the Moores School of Music at the University of Houston. With music degrees from Yale and Boston University and further studies at Harvard and the Tanglewood Music Festival, he has studied with Aaron Copeland, Lukas Foss, Walter Piston, Quincy Porter, and Gardner Read.

On the evening of November 9- 10, 1938, one of the first notorious Nazi spasms of violence against Jews occurred in cities throughout Germany in which storm troopers and civilians vandalized property and performed other outrages of intimidation. The shattered glass from these destroyed homes and shops became the historic metaphor for the memory of that night as Kristallnacht, “The Night of Broken Glass.” In 1988, to observe the fiftieth anniversary of Kristallnacht, Michael Horvit composed “Even When God Is Silent.” In his preface to the anthem, Dr. Horvit describes the specific inspiration for the work: “Allied troops found [a] poem written on the walls of a basement in Cologne, Germany. It had been written there by someone hiding from the Gestapo. It is one of the most poignant poems I know: an extraordinary testimony of faith under horrible circumstances.” The text of that poem reads “I believe in the sun even when it is not shining. I believe in love even when feeling it not. I believe in God even when God is silent.”

Wird sie kein Feind in Ewigkeit  No foe in all eternity

In Flanders Fields the poppies blow

Between the crosses row on row,

That mark our place; and in the sky

Scarce heard amid the guns below.

We are the Dead. Short days ago

Loved and were loved, and now we lie

Take up our quarrel with the foe:

To you from failing hands we throw

The torch; be yours to hold it high.

If ye break faith with us who die

We shall not sleep, though poppies grow

Mass in Time of War

Qui sedes ad dexteram Patris,  Who sits at the right hand of the Father,

visibilium omnium, et invisibilium.         and of all things, visible and invisible.

Et incarnatus est de Spiritu Sancto          And was incarnate by the Holy Ghost,

qui ex Patre Filioque procedit.  who proceeds from the Father and the Son,

Horvit: Even When God is Silent

I believe in the sun even when it is not shining.

I believe in love even when feeling it not.

I believe in God even when God is silent.