Hats Off! An Evening of Gilbert and Sullivan 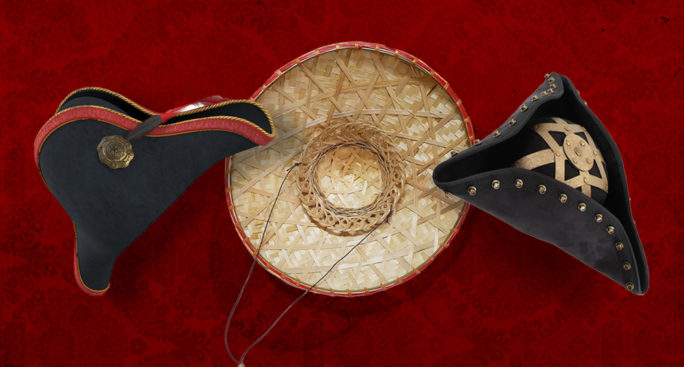 Hats Off! An Evening of Gilbert and Sullivan

Spend an evening in the topsy-turvy world of Gilbert and Sullivan operettas, as we present favorite selections from “Pirates of Penzance,” “The Mikado,” HMS Pinafore” and others.  Be transported to the “The Savoy” and enjoy the lighthearted music of late 19th century British musical theatre.

[The printed program contained the libretti from the works performed.  The following notes were given verbally from the stage.]

Welcome to HATS OFF, an evening of Gilbert and Sullivan. We are so pleased that you have joined us for this evening of operetta delights. Tonight’s music is a lot different than our last concert—the Requiem for the Living—which we performed in March. We’ve added some props tonight, and some character hats, in keeping with the theme HATS OFF!

Your program contains all of the words we will be singing tonight. You may want to follow along with these “libretti” as we sing, because Gilbert and Sullivan are known for “patter songs.” Late 19th century audiences at London’s Savoy theatre would generally follow the libretto as they enjoyed Gilbert & Sullivan productions.

We will be singing selections from 5 different operettas tonight. Before each set, I will briefly describe the operetta setting and the storyline. The plots of these operettas are famously complicated and “topsy turvy” (a term that has become associated with Gilbert and Sullivan, especially since the biographical film with that title that came out in 1999). I will try to share enough to help you understand the songs we will be presenting without trying to explain every last twist and turn!

My experience with Gilbert and Sullivan began in 9th grade when I was cast as the Captain in HMS Pinafore. At that time, the dialogue seemed quirky and strange and the lyrics didn’t always make sense to me. But the music… the music was so much fun and the melodies were so intoxicating that I was captivated. In subsequent years I was cast as Samuel in Pirates of Penzance, Marco in The Gondoliers, and Ko-Ko in The Mikado. In many ways, Gilbert and Sullivan was a “gateway” for me into more serious forms of classical music.

Perhaps this will be true for someone here tonight. After an admittedly surface-level introduction to these operettas, you might become curious and seek out a complete recording of one of these musicals. Or perhaps you might recognize the title in an advertisement for a live production and decide to get tickets. Or maybe you will Google search and read one of the complete librettos. When I was cast in Mikado my senior year and received my score, I remember reading the libretto on the bus ride home and laughing out loud at the ridiculous dialogue.

We begin tonight with the Gondoliers, set in Venice, naturally. Gondoliers are the men who pilot passenger boats through the Venetian canals. They are “nautical cab drivers,” if you will. The plot of this operetta revolves around two gondoliers, one of whom was unknowingly switched at birth and is actually the King of Barataria. We don’t know which one, of course, until the end. You just heard Kitty [Grubbs] play the overture. We pick up the action as the two gondoliers are greeted by the village women (the “contadine”). These two bachelor gondoliers are about to choose their brides and the women offer a slightly seductive greeting to the two men which includes giving them flowers to profess their love. The other gondoliers proudly deny jealousy and eventually join in the serenade.

We then meet the Duke of Plaza Toro, sung by Adam Grubbs. He has arrived with his daughter Casilda who is the queen-to-be. The Duke sings about his military career, which, as we discover, was mostly avoiding danger and confrontation. In the meantime, the new brides of the Gondoliers assume falsely that if one of the gondoliers will be king, that means one of THEM will be queen. We finish this set as we sing and describe their ideas of what they think it means to be a queen.

Several times tonight the choir sings what would normally be an ensemble (4 solo voices). Hopefully this won’t confuse you any more than the plots themselves. I encourage you to relax, follow the libretto in your program and enjoy the music!

The twenty lovesick maidens of the operetta PATIENCE are caught up in the aesthetic craze of the 1880s and are obsessed with the ‘Fleshly Poet’ Bunthorne (sung by Adam Grubbs). They hang on Bunthorne’s every word and every glance, much to the confusion of the dragoons, the local military men. The “doleful train” chorus is a partner song—the lyrical opening melody sung by the women eventually pairing with the “ridiculous and preposterous” patter-song of the dragoons.

Later in the operetta, we are faced with a marital quandary because of three potential grooms and only two potential brides. The Duke (sung by Brent Stenson) is the ranking suitor and so describes the possibilities for pairings. The odd man left out is left with the Gilbert and Sullivan equivalent of “thoughts and prayers”— they call it “a heart-felt sympathy.” The music of “If Saphir I choose to marry” is rollicking and dance-like.

THE MIKADO is set in Japan and reflects the late 19th century British “discovery” of far eastern culture. Precariously close to offensive and non-politically correct, the hyphenated, pseudo-Japanese character names and the cultural jokes might make us slightly uncomfortable at times.

We begin with the popular “Three Little Maids” trio and then the follow-up tongue-twister “So please you, Sir, We much regret.” We are introduced to Yum-Yum, a bride-to-be, and her two wards, Pitti-Sing and Peep-Bo. The plot revolves around a very strict law in the land which forbids flirting of any kind—such an offense is punished by decapitation. Also complicating things for Yum-Yum is the fact that she is being romantically pursued by Ko-Ko, who happens to be the Lord High Executioner. In the song “We’re you not to Ko-Ko plighted,” Yum-Yum and her true love, Nanki-Poo, sing and demonstrate the kinds of flirty behaviors they could never do within the current circumstances. To make matters worse, the Mikado of Japan is growing impatient because there have been no executions, and gives Ko-Ko one month to carry out his duty or else the town would be demoted to the status of a mere village. Ko-Ko and two town officials– Pooh-Bah and Pish-Tush– discuss who might volunteer to be the victim to save the town and preserve the benefits (financial and otherwise) that come with “town” status. We have turned this trio into a feature for the entire male chorus.

If you think all of this decapitation and execution violence seems a bit much for a comedic operetta, I think you are probably right. I’ve suggested that Mikado may have eventually paved the way for future British comedians who sought laughs from violent, bloody exhibitions half a century later. I’m thinking specifically of the Black Knight scene in the film Monty Python and the Holy Grail. Before there was the Black Knight, losing all four of his limbs to King Arthur’s sword with blood squirting everywhere, there was this song about a “short, sharp shock from a cheap and chippy chopper on a big black block!”

Oh, and one more strict and violent law. When a married man is executed, his wife is to be buried alive. The choir concludes the Mikado set with “Brightly dawns our wedding day,” a wedding madrigal that tries to balance the happiness of the wedding event with the eventual demise of the to-be-executed husband and the to-be-buried-alive wife.

Just so you know, in the the end no one is executed (spoiler) and two couples are married. I know. Very topsy-turvy!

In our day, Pirates of Penzance has emerged as the most prominent Gilbert and Sullivan operetta. The Broadway version, which was eventually made into a movie, featured Linda Rondstadt, Kevin Kline, and Angela Lansbury. The Atlanta Opera produced a production of Pirates last season.

We begin with the women of the choir singing “Climbing over Rocky Mountain.” These are the wards of Major General Stanley. They are sightseeing ashore when they are discovered by the band of pirates. The women react negatively to the rough men. But one of them, Mabel (sung by Allie Bankston), is not afraid to show kindness to the Pirate Frederick and sings “Poor Wandering One” as she offers her affection.

We then meet the Major General himself (sung by Adam Grubbs) as he sings the most recognizable and most often parodied aria from the operetta—the quintessential patter-song, “I am the very model of a Modern Major-General.”

Everything is going great for Frederick and Mabel until Frederick discovers that his commitment to the pirate band expires on his 21st birthday, and even though he has served the pirate king for 21 years, because he was born on February 29 on leap year, he will be indentured for a very long time to come. The choir sings a choral setting of their touching love duet, “Ah! Leave me not to pine.”

The action of Pirates builds into a confrontation between the pirates and the police force defending the Major General. The Police Sergeant (sung by Bruce Reid) describes how the nervous policemen like to sing and slap their chests to prepare for a battle with their foes. The women try to encourage them with visions of dying gloriously in battle and being fondly remembered, but this only makes the men more nervous. They hesitate and delay until finally the Major General urges them “forward on the foe.”

The “policemen” of the choir then shift characters to sing the pirate chorus “With cat-like tread.” Samuel, the pirate lieutenant (sung by Brent Stenson), provides the gear for the burglary attack on the Major General’s estate. This chorus may be familiar to you as the song “Hail, hail, the gang’s all here.”

We conclude tonight’s concert with a brief set from HMS Pinafore. Of all of the operettas represented tonight, Pinafore was the earliest. It was the first Gilbert and Sullivan collaboration to be an international success. The Pinafore themes have an underlying sense of British naval pride, as can be seen in the song “A British tar is a soaring soul.”

The conflict in the drama is over marriage between those of differing social status-levels. The middle-class Captain’s daughter Josephine (sung by former GCA soprano and special guest Madison Smith), is in love with Ralph, a common or “simple” sailor. In her head, she knows she shouldn’t even consider marrying beneath her station, but in her heart, she knows her love is true. She is torn and hesitant to accept his affection.

I assigned this aria to Madison back when she took voice lessons from me in high school. A few weeks ago she performed it for her senior recital at Georgia College in Milledgeville. Tonight she asked her mother Alicia to accompany her one more time as she performs it in public for all of us.

In the meantime, the Captain is trying to persuade Sir Joseph, the upper-class ruler of the Queen’s Navy, to marry his daughter Josephine, even though she is from a lower class than his. When Sir Joseph assures the Captain and Josephine that “love levels all ranks,” it backfires as Josephine takes this to mean that she can marry Ralph. The chorus “Never mind the why and wherefore” is sung at the moment when everyone thinks they are getting what they want. There are more topsy-turvy plot twists to come before the finale of Pinafore, but for US tonight, this seems like a happy place to end.